In prehistoric times, the Nuragic people produced sheep’s cheese — it was the perfect way to preserve their milk. Affectionately known as the Island of Cheeses, the Sardinian shepherd culture has supplied delicate and quality cheeses from the earliest Nuragic period. Such cheeses have graced the tables of Roman senators and became so valuable at certain points in history that that levies had to be imposed. 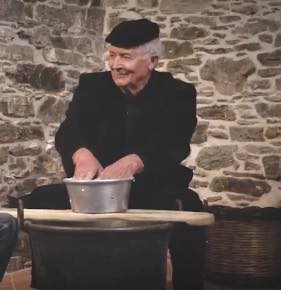 So well-known is the cheese that the Cacio, for example, became the object of international treaties and achieved Protected Designation of Origin (PDO) Status.  The overseas demand for Pecorino Romano brought about an increase in the number of sheep and the new regulations from Rome resulted in Sardinia remaining faithful to cheese making traditions.  Sardinian cheese making was also influenced by the techniques of southern Italy and Greece.

The result of this is a selection of delicate goat cheeses which highlight an ancient pastoral tradition. In 1996, Pecorino Romano, Fiore Sardo, and Pecorino Sardo were listed in the Stresa Convention of 1951 giving it a type of nobility and prestige. Little of the beauty of the Sardinian landscape has changed over time. With its crystal blue sea, cool and magical mountainsides, perfumed flora and stunning rivers, Sardinia is the ideal environment for fantastic cheeses. Making cheese could last for months, and even years, and maintain its excellent taste and nutritional value. 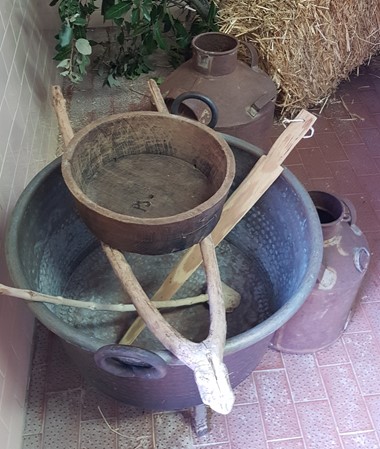 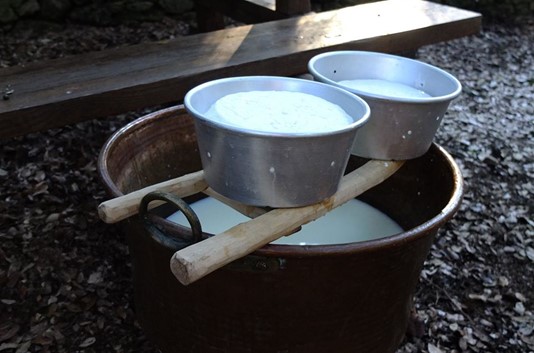 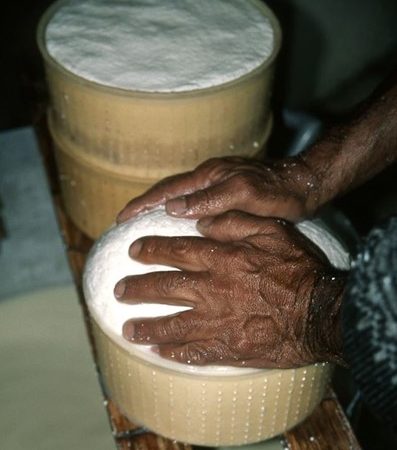 Over the centuries Sardinia has been known for the quality of the milk from its local animals and for the mastery of its cheese makers. Shepherding is at the heart of Sardinian culture.

Canestrati: typical southern Italian ewe’s milk cheeses with a sign left on the rind by the willow basket (canestra) in which it if formed. It is flavored by the kid rennet to give it an especially sharp flavor.Caprini: Goats milk cheeses of Sardinia are sharp and flavorful. The soft variety is known as pasta molle and is created in a hexagon shape. The cheese itself is highly fragrant, soft and oily but can come in a few varieties. All can be enjoyed as they are or melted.

Crema: cream cheeses of Sardinia can be made of Pecorino Romano, Pecorino Sardo, ricotta and cream of ewe’s whey. Whether mild or sharp these soft cheeses can often replace butter and add subtle flavors to a variety of dishes.

Fiore Sardo: spoken of from the early 18th century, this ewe’s milk is curdled without cooking using lamb rennet in pastry form and thereafter smoke dried. It can be enjoyed fresh or roasted. It can also be grated into soups or pasta when hard.

Fresa: difficult to make and in a gourd-shaped peretta, this cheese is best made in autumn to ensure chemical and microbiological balance.

Peretta: this is a pear-shaped, cow’s milk cheese, often found on tables and sometimes roasted over the embers and flavoured with honey.

Fresh cheese: often made by shepherds for festivals, this is a semi-needed, unsalted curd which is kept moist in order for the bacteria to best function.

Su Casu in Filixi: ” (fern cheese) is a soft goat or sheep cheese made in fern leaves to aromatizes the cheese and leaves its scented mark on it.

Soft Ewe’s cheeses: a cheese which is fairly new to Sardinia, made through heat and with a delicate texture. The taste is silky and fresh and the cheese is pocketed with holes to give is a distinct look, well known as “Il Bonassai”.

Pecorino Romano: originally from Italy, this cheese has been adopted by Sardinia and was also one of the first D.O.C. cheeses. The rind and cheese are light in color with a compact interior. Made entirely of ewe’s milk, with a strong, sharp flavor, this cheese goes well with pasta such as spagehetti, fetuccini, gnocchetti sardi and conchigliette.

Pecorino Sardo: recently awarded the prestigious D.O.C. this cheese is made with whole ewe’s milk in small wheels and sold in small vacuum-packed portions. The color is white to light yellow and the cheese itself is compact and versatile. With a strong flavor it should not be left off any cheese platter.

La Gentile: they whey left over from cheesemaking is turned into ricotta which is often presented in a cone shape with a mild flavor. It is used with ravioli or pardulas and is a perfect dessert ingredient.

Cured Ricotta: also created in a cylindrical form or cone, it is pressed and sprinkled with salt. The smoke-drying makes it a perfect addition to soups and traditional dishes.

Vrue (Frue, Casu Axedu): this traditional curdled ewe or goat’s milk was made in a cork recipient called a su vruale and is only served after 48 hours. This is important to create a slightly sour but refreshing flavor.  After 48 hours the Vrue can be pickled. It is used as salt substitute in soups, ravioli and others traditional dishes.

Cassizolu: kneaded-curd cheese, one of the very few Sardinian cheeses made with cow milk. This cheese is characteristic of Montiferru region.

Casu Marzu: literally means ‘rotten Pecorino cheese’ and is made exclusively in Sardinia. The spicy, creamy cheese contains live maggots (Known as dairy fly larvae “Mosca Casearia”) and is a part of the Sardinian food heritage.

Callu de Crabittu: made with goat milk, the method to make this cheese follows deep roots of ancient Sardinian shepherds’ traditions. The final product is a spreadable cheese, with an intense smell and a spicy taste.

This website uses cookies to improve your experience while you navigate through the website. Out of these, the cookies that are categorized as necessary are stored on your browser as they are essential for the working of basic functionalities of the website. We also use third-party cookies that help us analyze and understand how you use this website. These cookies will be stored in your browser only with your consent. You also have the option to opt-out of these cookies. But opting out of some of these cookies may affect your browsing experience.
Necessary Always Enabled

Performance cookies are used to understand and analyze the key performance indexes of the website which helps in delivering a better user experience for the visitors.

Analytical cookies are used to understand how visitors interact with the website. These cookies help provide information on metrics the number of visitors, bounce rate, traffic source, etc.

Advertisement cookies are used to provide visitors with relevant ads and marketing campaigns. These cookies track visitors across websites and collect information to provide customized ads.

Other uncategorized cookies are those that are being analyzed and have not been classified into a category as yet.