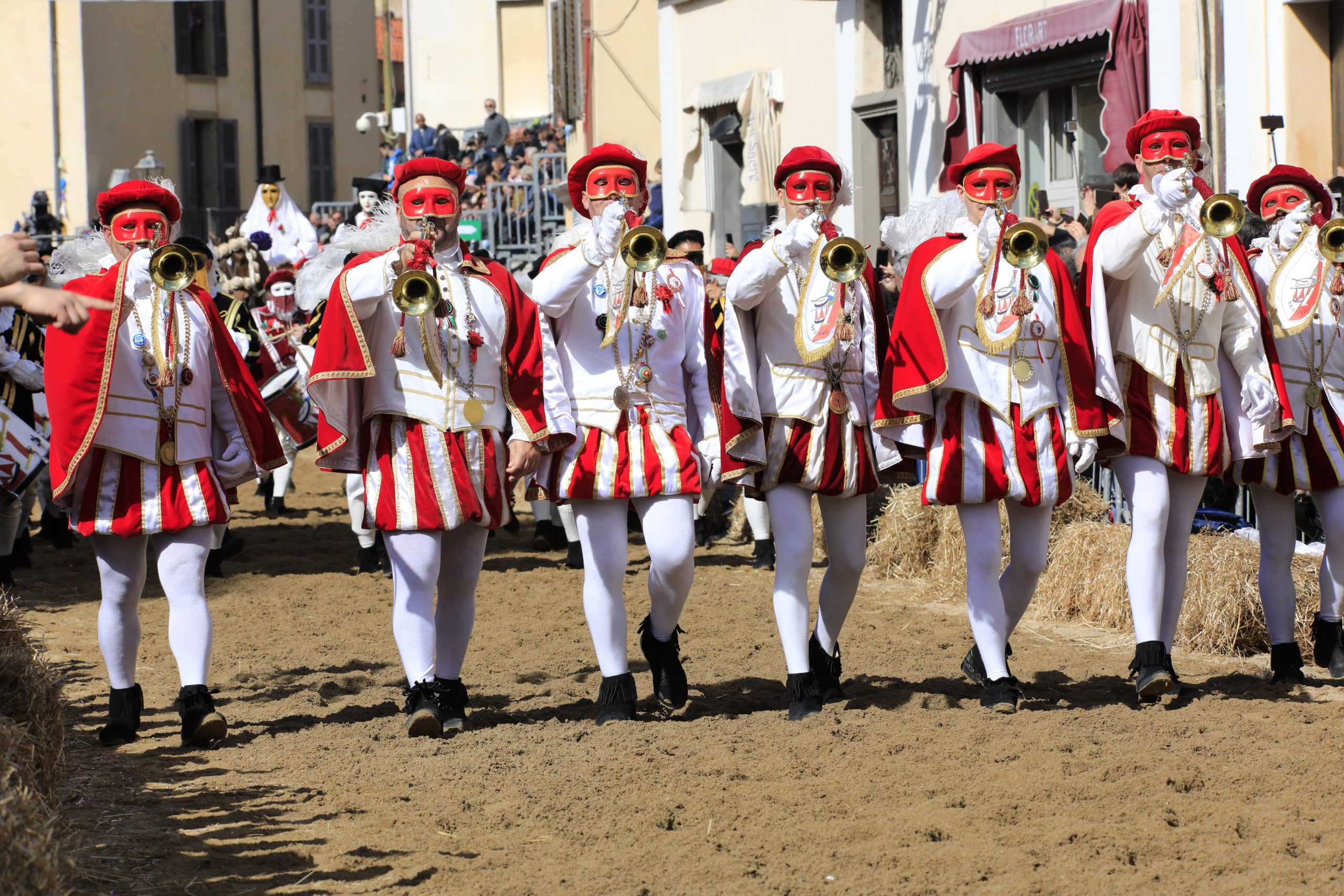 Oldest documents related to the Sartiglia refer to the town of Oristano during the spanish age. This ancient tradition handed down orally by the inhabitants of Oristano (old Guild members or elderly horsemen) has never been interrupted and every year, regardless of weather conditions, the Sartiglia has been run and ‘Su Componidori’ has been leading the ritual ceremony of the joust.

For five hundred years, the tournament has deeply penetrated the culture and the community of Oristano. A sort of spell seems to renew the event in every edition and enrich it with the ancient past.

The route of Sartiglia winds along the old streets of the town. First is the dressing of ‘Su Componidori’, usually outside the old centre.

Then the horseman will aim to spear a star suspended to a green ribbon, stretched under the 14th-century bell tower of the Cathedral of the Archdiocese of Oristano.

Finally, the gallop of horsemen trying to catch the star – ride past the church of Sant’Antonio, the chapel of an ancient medieval hospital, and the small church of the Holy Spirit, of Byzantine origin ends in the square in front of the church of San Mauro. The entire route is surrounded by cheering crowds and the powerful sound of the horsemen.

During the Spanish period, the Royal Cities of the Kingdom of Sardinia – namely the seven towns of Cagliari, Sassari, Oristano, Alghero, Iglesias, Castelsardo and Bosa, unbound to feudal duties, were granted special privileges, including the possibility of establishing guilds.

For more than five hundred years, the guilds of the two chief towns have been taking care to preserve from oblivion their most characteristic events: in Sassari, the ceremony of the procession (‘Discesa’) of ‘Candelieri’, related to an ancient vow made to the Virgin of the Assumption; in Oristano, the historical equestrian tournament of the Sartiglia.

Every year, the Sartiglia horsemen’s continuous search for beauty and magnificence is expressed by the passage of the majestic cortege, the elegant horses richly harnessed with colourful bows and satin ribbons, and mounted by horsemen dressed in the precious costumes of Sardinian and Spanish traditions.

Ceremonial rites of Sartiglia are focused on the figure of ‘Su Componidori’.

Every year, on Candlemas day (2nd February), the maximum authorities of Farmers’ and Carpenters’ Guilds officially appoint their own head of the joust.

The investiture of the horsemen is marked by giving them a blessed tall candle. In a venue chosen by the Guild, the most solemn ceremony of the Sartiglia transforms the selected horseman into the figure of ‘Componidori’.

Aided by the expert hands of ‘massaieddas’ (young girls wearing the ancient traditional costume of Oristano), supervised by a senior assistant (a woman called ‘Sa Massaia Manna’), the horseman is enrobed with the ancient dress of ‘Su Componidori’.

‘Su Componidori’ is a mysterious, almost sacred, figure. At the end of the dressing ceremony, he will have to mount his horse without touching the ground.

Next he will announce the joust started by crossing his sword three times with his Second-in-command. Only the ‘Componidori’ will be entitled to choose, among the horsemen, those who will have the honour to try and spear the star.

Finally, he will bring the joust to an official close by riding flat on his horse’s back, now three abreast with his mates, while greeting and blessing the crowd with his sceptre of violets.

At the end of the dressing ceremony of ‘Su Componidori’, the parade of horsemen proceeds towards the street of the Cathedral of Santa Maria Assunta, led by the head of the joust, preceded by buglers and drummers and by the Guild organizing the tournament of the day.

The passing of the cortege is one of the most exciting moments of the event with magnificent horses and horsemen wearing ancient costumes of Sardinian and Spanish tradition.

The race of ‘pariglie’ (meaning either a pair or a group of three horses) takes place in via Mazzini, along a route traced right where the ancient town walls once rose.

At the end of the parade, along the track of via Mazzini, the horsemen take a few side-streets leading to a secondary road, which ends in a characteristic small tunnel, symbolically marking the start of riders’ daring performances.

The hazardous equestrian show goes on with riders as spectacular figures. The last passage on the track is focused on ‘su Componidori’ and his ‘pariglia’. It is marked by a second ‘remada’ where he will lie flat on his horse’s back, greeting and blessing the crowds with ‘sa pipia de maiu’.

Candlemas  and  The Ban

At the end of the dressing ceremony of ‘Su Componidori’, the parade of horsemen proceeds towards the street of the Cathedral of Santa Maria Assunta, led by the head of the joust, preceded by buglers and drummers and by the Guild organizing the tournament of the day.

The passing of the cortege is one of the most exciting moments of the event with magnificent horses and horsemen wearing ancient costumes of Sardinian and Spanish tradition.

(The beautiful days are preserved for the bad ones)